Definition: A portion of space designated for a purpose.

L-brackets, as seen below, tend to be easiest to read, but you may also see hierarchical relationships depicted as trees or pyramids. 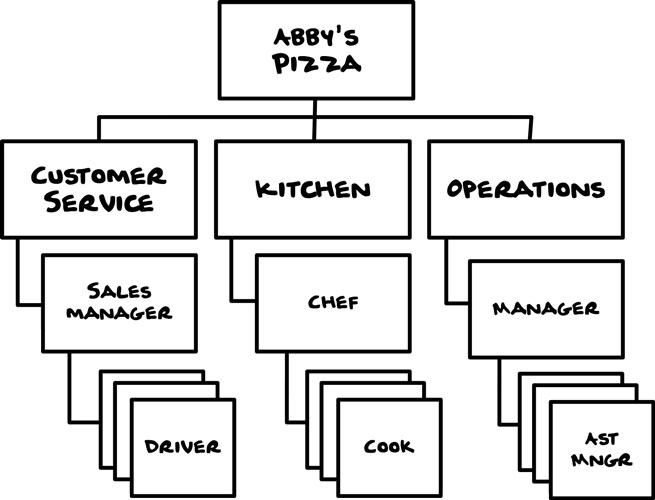 A mind map illustrates the connections between concepts, objects, ideas, channels, people, and places within a particular context.

These concepts don’t necessarily live under an established hierarchy or sequence. For example, in the diagram above, I’ve outlined the various aspects of running a pizza parlor as the owner (me!) might think about them. 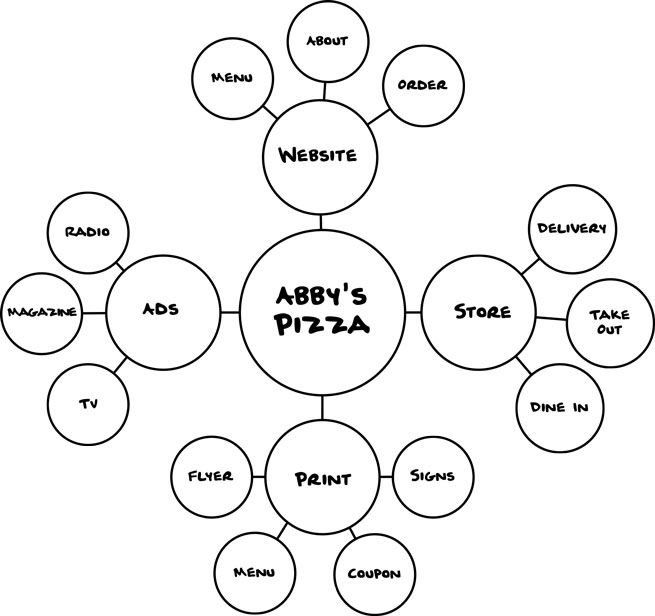 A journey map shows all of the steps and places that make up a person or group’s experience.

The rows represent the user’s context (e.g., outside, on the bus, at home). Each point represents an event or a task that makes up the overall journey. Each point is placed sequentially as it relates to the other points.

This example shows events that only involve one person, but journey maps are also useful for showing the movement of pairs, teams, and organizations.

We work at different levels.

When we reference things, they exist within other things and places too. For example, a mug exists within a cabinet, in a coffee shop, in a building, on a city block, in a neighborhood, in a city, in a state, in a country, on a continent, and so on.

Digital things live within other things and places, including physical and analog places. For example, a user accesses a mobile application on a smartphone, in a coffee shop, in a building, on a city block.

We make places and we make things. The places and things that we make are part of a user’s real life.

What are you making?

Nothing exists in a vacuum. Everything connects to a larger whole. Whenever you’re making something, figure out which levels you’re working at:

Interface: a point where a user affects that thing.

Location: a particular place or position.

Journey: the steps in or between locations.

Structure: a configuration of objects and locations.

System: a set of structures working together.

Ecosystem: a collection of related systems.

You can turn a space into a place by arranging it so people know what to do there. This act is called placemaking. If you arrange a table and chairs in the middle of a room, meetings, meals, study, and play are all potential uses of that place. But if you add a fancy dining set and linens to the table, you’re suggesting that it’s a dining area.

In placemaking, you choreograph a sequence of steps users can take and decide how you want them to move. You can recommend steps, but they’ll move wherever and however they want. They may move the place settings aside and open a laptop for a meeting. You can prescribe the steps, but they do the dancing.

The ways you enforce your way of doing things changes how users think about the place you made and perhaps ultimately, how they think about you.

You could add a sign that says “Dining Only Please.” You could also add waitstaff wearing tuxedos and glaring dispositions. Each of these would say something about you and the place you made.

The way we choose to arrange a place changes how people interpret and use it. We encode our intent through the clues we leave for users to know what we want them to do.

There are spaces between the places we make.

When you’re cleaning up a big mess, assess the spaces between places as well as the places themselves.

A place is a space designated for a specific purpose.

For example, if you built a public park, you might make a path to walk on, a picnic area, a playground, some bathrooms, and a soccer field. These areas were made with tasks in mind.

If parkgoers wear down a path through your fresh laid grass, you as the parkitect (ha!) could see it as an annoyance. Or you could see it as a space between places and pave over it so people can get where they want to go without walking through the mud.

A space is an open, free, or unoccupied area.

Space may not have a designated purpose yet, but that doesn’t stop users from going there.

No matter what you’re making, your users will find spaces between places. They bring their own context and channels with them, and they show you where you should go next. Find areas in flux and shine a light on them.

Think about nouns and verbs.

Nouns represent each of the objects, people, and places involved in a mess.

As an example, a post is a noun commonly associated with another noun, an author.

Verbs represent the actions that can be taken.

Nouns are often created as a result of verbs. A post only exists after posting

It’s easy to adopt terms that are already in use or to be lazy in choosing our language. But when you’re deciding which words to use, it is important to consider the alternatives, perceptions, and associations around each term.

How would your work be different if “authors writing posts” was changed to “researchers authoring papers,” or “followers submitting comments?”

Progress is as important to measure as success.

Many projects are more manageable if you cut them into smaller tasks. Sequencing those tasks can mean moving through a tangled web of dependencies.

A dependency is a condition that has to be in place for something to happen. For example, the links throughout this book are dependent on me publishing the content.

How you choose to measure progress can affect the likelihood of your success. Choose a measurement that reinforces your intent. For example:

Sorting is easier than deciding how to sort.

Sorting is the act of arranging content according to established rules. The act of deciding how to sort something within a taxonomy is called classification.

If you have a large pile of things, it may take a lot of time to sort through them. But sorting isn’t the hard part. Classification is.

Think about sorting a bag of groceries into a pre-arranged pantry. Everything has a place. You’re simply following the plan. Easy, right?

Now unload that same bag into a kitchen without rules for where things go. How much longer would it take you? How much more frustrating a task would it be? How much variation would you get when the next person unloads groceries?

Sorting is easy when clear rules are in place. But without those rules, assumptions take over and things end up in places where they can be harder to find.

The most challenging part of classification is working with other people to agree on a set of rules.

We use hypertext to connect things without necessarily placing them together.

Hypertexts are fundamentally different from hierarchical, heterarchical, and sequential taxonomies, because they don’t change where things are located, just how they’re found.

We use hyperlinks to allow users to jump between taxonomies instead of duplicating or moving content. For example, we might hyperlink the bolded words throughout this book. If a user clicks on one of them, we could take them to a definition in the lexicon. We’re moving the user to the content instead of repeating it.

A signpost directing you to a store around the corner is also hypertextual, because it sends you to a specific location without changing the location of the store.

Similarly, websites use hypertext to link to content without needing to repeat it.

Because your structure may change a hundred times before you finish making it, you can save time and frustration by thinking with boxes and arrows before making real changes. Boxes and arrows are easier to move around than the other materials we work with, so start there.

Try structuring the mess with common patterns of boxes and arrows as shown on the next page. Remember that you’ll probably need to combine more than one pattern to find a structure that works.