Definition: The internal belief structure and thought process we use to make sense of the world.

Objects let us have deeper conversations about reality.

When you discuss a specific subject, you subconsciously reference part of a large internal map of what you know.

Other people can’t see this map. It only exists in your head, and it’s called your mental model.

When faced with a problem, you reference your mental model and try to organize the aspects and complexities of what you see into recognizable patterns. Your ongoing experience changes your mental model. This book is changing it right now.

We create objects like maps, diagrams, prototypes, and lists to share what we understand and perceive. Objects allow us to compare our mental models with each other.

These objects represent our ideas, actions, and insights. When we reference objects during a conversation, we can go deeper and be more specific than verbalizing alone.

As an example, it’s much easier to teach someone about the inner-workings of a car engine with a picture, animation, diagram, or working model.

A block diagram depicts how objects and their attributes interrelate to create a concept.

A concept is an abstract idea or general notion that exists in people’s mental models. For example, pizza is a concept on which many actual pies are fired. 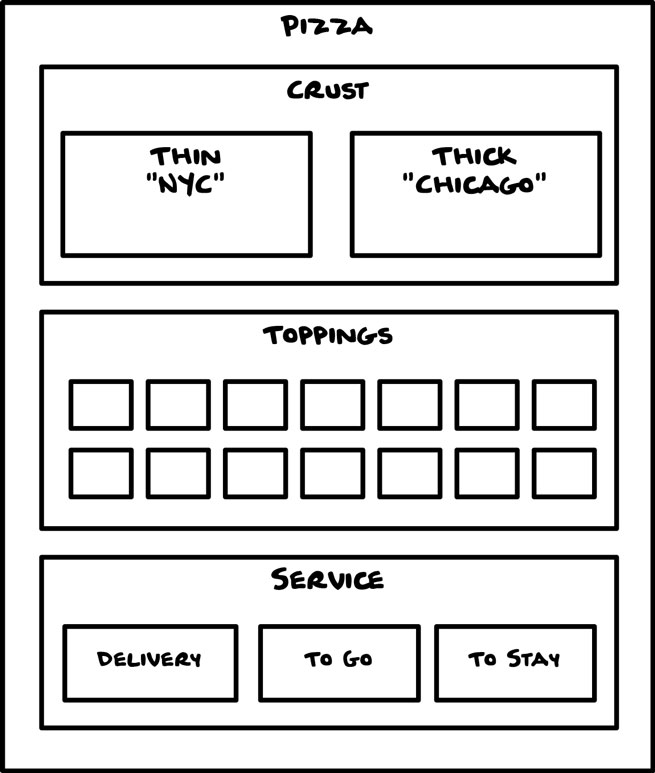 Maggie is the creative director for a small agency. She has a new client, and doesnt understand their business.

She reads their website, annual reports, and printed brochures, and still can’t pinpoint what they do. She’s not the only one. It turns out that no one on her team can figure out what the client’s business does either. Maggie knows she has to clear this up before overseeing work for the client.

Even if Maggie is the most talented creative director in the world, her work won’t matter much until she faces the reality that she doesn’t understand her client’s business. She needs to get a clearer mental model out of her client’s head and into her team’s hands.

In an attempt to face reality, Maggie asks her client to describe the business in the simplest way possible. “Like you would at a grade school career day,” she says.

With that as a basic model, she can ask better questions and compare her client’s mental model with her own. She uses a mind map to capture thoughts as they talk. After talking with her client, Maggie has a clearer understanding of their business and much more confidence that her team can support their needs.

A controlled vocabulary doesn’t have to end with terms you intend to use. Go deeper by defining terms and concepts that misalign with your intent.

For the sake of clarity, you can also define:

Tomatoes are scientifically classified as a fruit. Some people know this and some don’t. The tomato is a great example of the vast disagreements humans have with established exact classifications.

Our mental models shape our behavior and how we relate to information.

In the case of the tomato, there are clearly differences between what science classifies as a fruit and what humans consider appropriate for fruit salad.

If you owned an online grocery service, would you dare to only list tomatoes as fruit?

Sure, you could avoid the fruit or vegetable debate entirely by classifying everything as “produce,” or you could list tomatoes in “fruit” and “vegetables.”

But what if I told you that squash, olives, cucumbers, avocados, eggplant, peppers, and okra are also fruits that are commonly mistaken as vegetables?

What do we even mean when we say “fruit” or “vegetable” in casual conversations? Classification systems can be unhelpful and indistinguishable when you’re sorting things for a particular context.

Argue about discuss it until it’s clear.

It’s totally normal for fear, anxiety, and linguistic insecurity to get in the way of progress. Learning to work with others while they’re experiencing these not-so-pleasant realities is the hardest part of making sense of a mess.

Tension can lead to arguments. Arguments can cause resentment. Resentment can kill momentum. And when momentum stalls, messes grow larger and meaner.

To get through the tension, try to understand other people’s positions and perceptions: